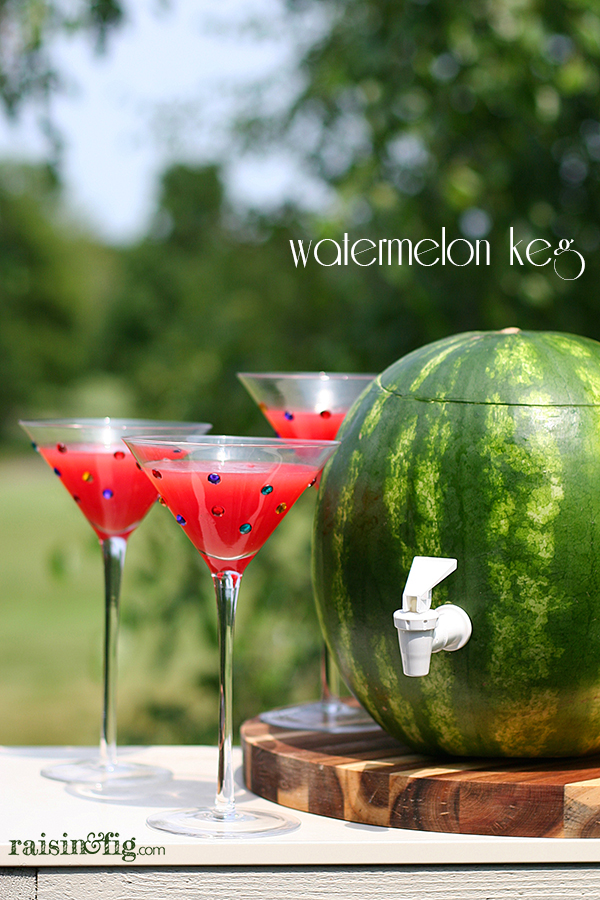 Who knew that you could easily impress your friends with a watermelon, a knife and  $6 spigot?

You may not grow your own food or build your own furniture, but introduce a Watermelon Keg at your next gathering and people will start to call you names. Like “Martha Stewart.”

This is another gem I got from Georgia Pellegrini’s book “Modern Pioneering.” So far, I’ve become addicted to her Cauliflower Steaks, learned to tie a bowline, and turned a Mason jar into a lantern. This project provided a sweet reward for the efforts.

I have filled the “keg” with water {and watermelon ice cubes} to make a refreshing summer thirst quencher. I’ve also simply pureed the watermelon chunks in a blender and filled it with that. {You’d think this would result in more of a “slushy” but there’s so much H2O in watermelon that the resulting puree is thin enough to use here.}

I am told that filling the keg with a certain clear adult beverage would make it a perfect cocktail dispenser. Well, there’s plenty of summer left for that experiment!

Making one of these takes 5 minutes. But first, you’ll need a spigot of some sort. I ordered mine from Amazon for $6.80.

To make it: Cut off just enough of the bottom of the watermelon to allow it to stand flat on your table or counter. {You don’t want to cut more than ½ inch, or you’ll cut through the rind and expose the flesh, which will eventually allow the liquid you put in the keg to leak.}

Next, cut off about 1 ½ – 2 inches from the top of the melon. Reserve the piece you cut off – that will be your lid.

Scoop out the flesh from the top ¾ of the melon, leaving a few inches at the bottom. Make sure to remove any loose “chunks” as they will clog the dispenser.

Puree the flesh you removed in a blender, making sure there are no chunks. You can either make ice cubes out of this watermelon juice or fill the keg with it.

Fill the dispenser with the beverage of your choice, replace the lid and enjoy!

Feeling artsy? Sharpen that knife and carve a masterpiece. Like this one, from The Endearing Designer: 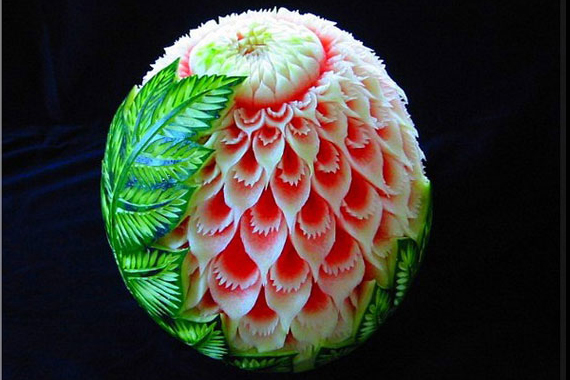 {For more inspiration, just Google “watermelon sculptures” and be amazed!}