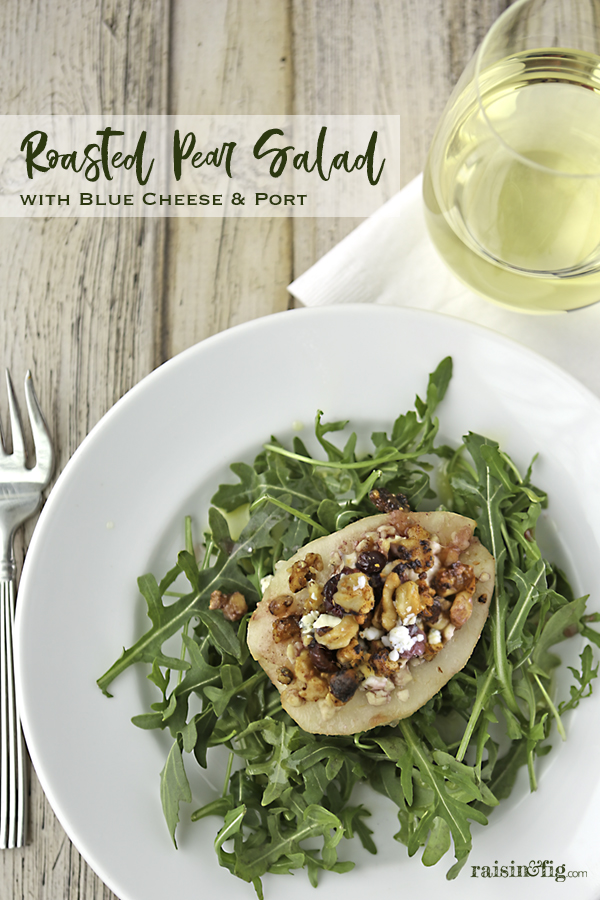 “We should have you over for dinner!”

We’ve all said it… and meant it… but for whatever reason, the dinner just never happens. Yet when it does, it’s always a treat. Last summer, some “new-ish” friends DID follow through and invited us over. We knew the company would be great — the delicious meal was a bonus! They served steaks from the grill, warmed bread and this Roasted Pear Salad with Blue Cheese and Port. Simple. Elegant. Fabulous.

Thankfully, our hostess shared the recipe – and I’ve been making it ever since — for many of my dinners with friends.

We all love those recipes that are quick and easy enough for a weeknight meal (or girl’s lunch), but also have enough “curb appeal” for entertaining. Turns out, this is one of The Barefoot Contessa’s recipes, so it’s no surprise it fits the bill.

The original recipe calls for Anjou pears to be filled with cranberries, walnuts and blue cheese, then drizzled with a mixture of port, brown sugar and apple cider, before roasting in the oven. They’re served warm or at room temperature on top of a bed of greens, dressed with a simple combination of fresh lemon juice, good olive oil and some of the basting liquid from the pears.

The pears and the dressing can both be made ahead of time. You can roast the pears earlier in the day, and just bring them back to room temp or pop them in a warm oven for a bit before plating.

Having made this several times since last summer, I’ve played with it — sometimes out of creativity, sometimes out of necessity! I’ve substituted pecans for the walnuts. Forgotten the cheese. And just left out the sugar and apple cider and glugged port over the top. I’m thinking I might use those tiny wild blueberries instead of the cranberries next time, just for fun. Last night I didn’t have arugula, so I used baby spinach and finely chopped kale. (Which apparently didn’t disguise it enough, because Husband called me out for trying to sneak kale into his repertoire!)

Sharing a home-cooked dinner with friends — old or new, is a gift. When the food is memorable, it’s a bonus.

You know those friends you’ve been meaning to have over for dinner? Call them.