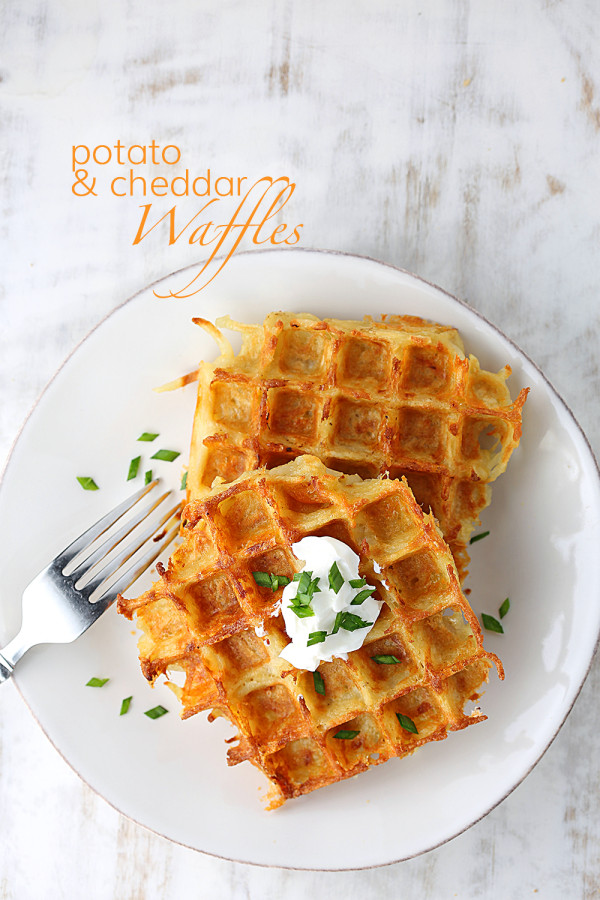 I’m not saying that Husband is a creature of habit when it comes to food, but let’s just say if I’m going to mess with his breakfast, I like to be pretty sure that I have a winner. When I ran across this recipe for Potato & Cheddar Waffles in Food & Wine recently, it bypassed my whole “try-this-someday” system {no really, I have a system!} and I announced we’d be trying something new the following morning.

Maybe you’ve tried making hash browns before – I love them but have had no luck making them at home. Typically you have to use a boatload of oil to get the right texture – a crispy crust on the outside that gives way to soft potatoes on the inside. Thanks to Mad Genius Justin Chapple, there’s a less-greasy solution.

If you’re stuck in a breakfast rut – or if you want a creative way to serve “hash browns” with that steak, I encourage you to DUST OFF THAT WAFFLE IRON IMMEDIATELY!

If you’re feeding a crowd, you can make these ahead and keep them warm in the oven. I froze a bunch to pop in the toaster or microwave.

Oh, and Husband has already alerted me that his waffle inventory is getting low, so I guess they are a hit!

Sweet Potato-Poblano Soup {spend a day with the nerds}