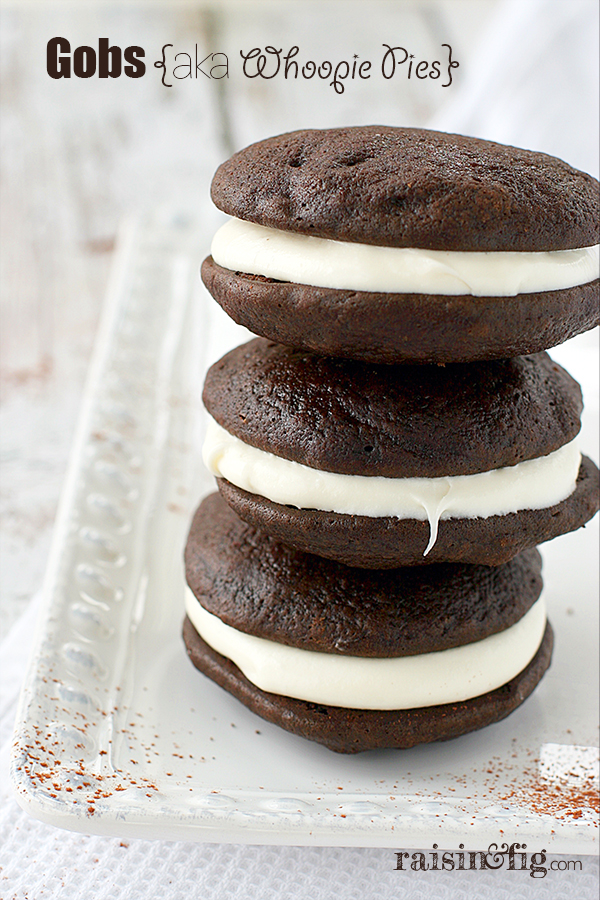 The part of Pennsylvania I’m from is known for coal-mining, odd language {for instance, saying “you’uns” instead of “you” or “y’all”}, and for Gobs.

There is an ongoing feud between Maine and Pennsylvania about who created these tasty treats. {The Pennsylvania Amish have my vote.} But they’re only called Gobs in the southwestern corner of Pennsylvania.

Ask for a Gob outside of the Pittsburgh area and you’re likely to be met with stares. “Hey! What are you’uns lookin’ at? Haven’t you ever had a gob before?!”  Well no, they probably haven’t – the rest of the world calls them Whoopie Pies.

What in the world is a “gob”? A folklorist with the Southwestern Pennsylvania Heritage Preservation Committee said, “I’m convinced that the name gob is related to the coal mines. Lumps of coal refuse were called gob piles. These working people adapted the name to the dessert.” If you’ve seen a gob pile, you’ll agree.

It’s only been recently that these have been showing up in the midwest. In fact, when a friend entered Red Velvet Whoopie Pies in an annual Christmas cookie contest I was judging, I was so excited to see them again that I declared him the winner, if only for nostalgic reasons.

This version – chocolate cake-like cookies connected by a marshmallow cream filling, most resembles the original {Amish!} concept, but these days you’ll find any number of variations. Chocolate with chocolate filling. Pumpkin. Carrot & Walnut. Coconut & Lemon Curd…. the possibilities are endless. Personally, I think Gobs {or Whoopie Pies} are the new cupcake!

I was originally introduced to Gobs by a babysitter named Betsy. I hunted her down while writing this post and found her on Facebook. I was pleased to find out she’s still making Gobs – and continues to introduce them to new converts.

This recipe is the one she shared with our family in Pennsylvania over 40 years ago.

6 Responses to Gobs {aka Whoopie Pies}