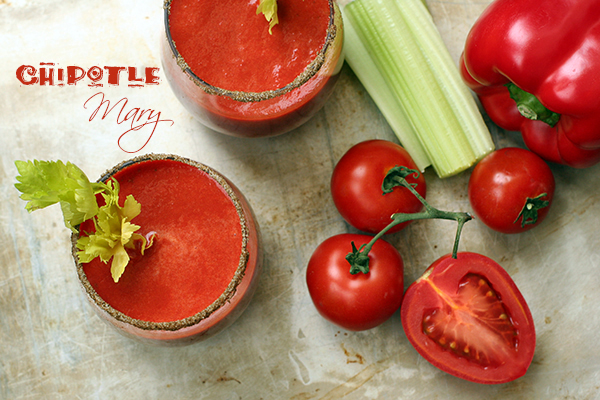 Welcome to my first-ever blog potluck! Here’s how it works: the uber-talented chef Robin Asbell has invited a couple of blogging friends to post a recipe from her cookbook “Juice It.” We are each posting a different concoction, and giving readers a chance to win a copy of the cookbook. More on that later, but first, let’s talk about the perfect beverage for a Sunday brunch.

There’s something about spending a weekend in the city… a leisurely Sunday brunch just feels right, and maybe a little decadent. Looking around Firefly – where we brunched while in DC a few Sundays ago – it was clear that the most popular brunch beverage (besides coffee) was a Bloody Mary. Our waiter told us theirs was famous, so we each ordered one. It was good, but next time I’m hosting a brunch, I’ll be serving them with Robin Asbell’s “Chipotle Mary” as the base.

If you’ve been thinking about juicing, this book is a terrific place to start. Besides providing some great general information to get you going, Robin divides the recipes into four sections: Energizing, Healing, Relaxing and Pure Pleasure Juices. 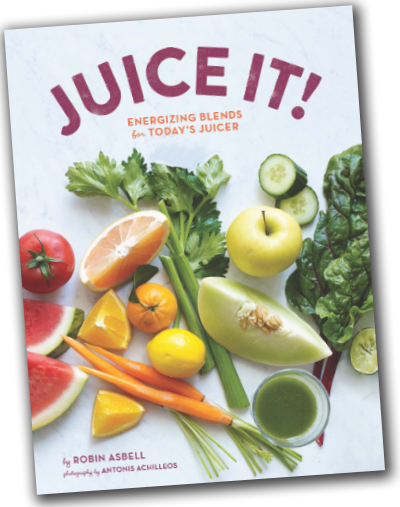 I was drawn immediately to the “Brain Booster” because the ingredients promote brain health. Not sure how many glasses of this one I’d have to down to increase my focus and productivity, but it was certainly tasty. While I’m writing this post, I’m sipping on the “Lean Green” – a super fresh-tasting green glass of goodness that would be great for a cleanse. Another contender for this post was the Superfruit Sangria. You won’t even miss the wine – but if you added it, this would beat any sangria you’ve tasted elsewhere. 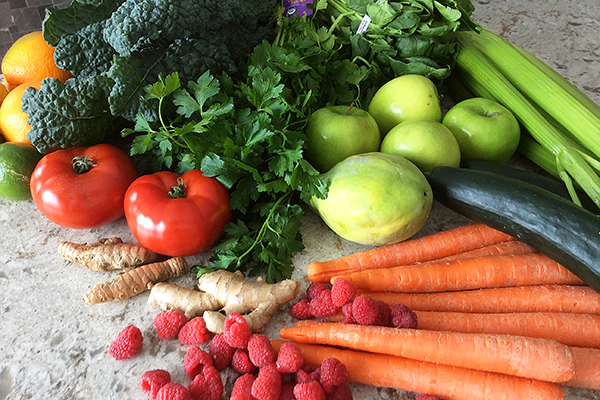 {You can see by the pic above I brought home enough veggies to try a bunch of recipes!}

I chose the “Chipotle Mary” for this potluck a couple of reasons. First, I wanted to try a vegetable-based juice to ward off the munchies in the afternoons. And, having seen years of “Wow, I could have had a V8” commercials, I figured this would be like making one at home – without all the added sodium that finds its way into the can. The fact that it could also serve as a tasty “mixer” for a Bloody Mary was appealing too!

This juice has 4 simple ingredients: tomato, red pepper, celery and a bit of ground chipotle chile. And it’s simply delicious. So much so, that I probably wouldn’t add a lot of the traditional spices and flavorings when using it as a mixer. {By the way, I also wouldn’t serve it with a meal-on-a-skewer, as some establishments do. Just give me a nice crisp celery stalk, and let’s call it good!} 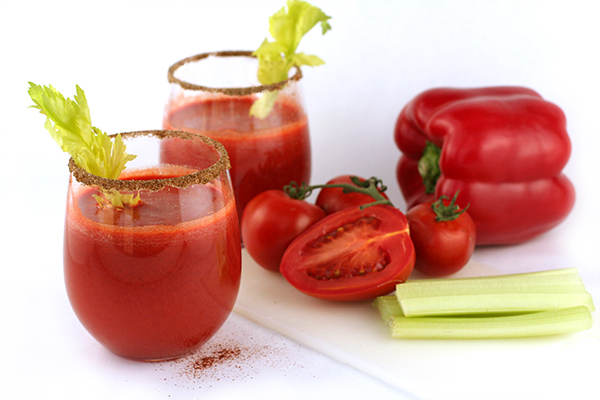 While you don’t have to remove stems from fruits and vegetables when juicing {I have a Breville juicer, which is an absolute workhorse} I do. Most of the time, I plan on using the pulp in something later. In this case, I was going to use the solids as a base for a tomato sauce, so off came the stems of the tomato and red pepper.

4.5 from 2 reviews
Print
Chipotle Mary
Author: Robin Asbell
Velvety tomatoes spiked with the sweet and smoky flavors of red bell pepper and chipotle will perk you right up. This is a great nonalcoholic aperitif; serve it while you are waiting for dinner, instead of filling up on chips and salsa.
Ingredients
Instructions
Notes
Robin's recipe calls for peeling the tomatoes, because they tended to clog her juicer. I didn't have that issue with mine, so I left them on.
3.2.2310
The verdict? The Chipotle Mary is both delicious and filling, and the chipotle pepper gives the drink a nice kick. The next time I’m making a special brunch, complete with Bloody Marys, this will be the base I use.

Back to the potluck and the giveaway!

First, please visit the other bloggers to get a taste of the juice that they tried – and check out their other awesome recipes!

We asked you: “If you could enjoy a leisurely Sunday brunch {complete with a Chipotle Mary!} anywhere in the world, where would it be?”  See answers below! And congrats to Kathy M in Lake Ozark, Missouri who won a copy of Juice It!