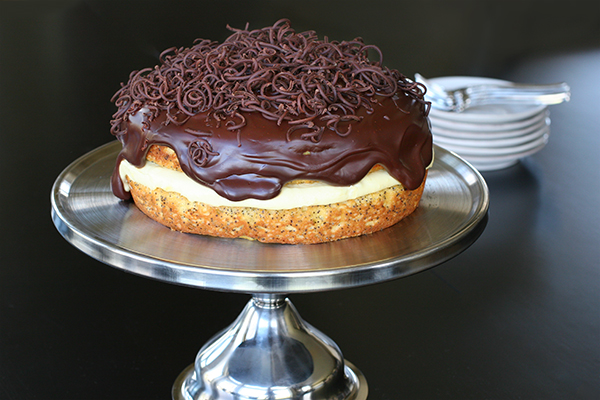 Our friends know that when they come to our house for dinner, they are going to be guinea pigs. While I love having a bunch of tried-and-true recipes, I am always looking to add to my repertoire. And if I have a weak area, it’s dessert. So when I needed ideas for a recent gathering, Husband suggested I try Boston Cream Pie.

I thought it would be easy enough – my sister makes a fabulous version. If I could get my hands on that recipe, it would be a slam-dunk. Just one problem… She was traveling, which meant I would have to punt. Before we get to the recipe, I wanted to find out why a dessert that is clearly a “cake” is called a “pie.”

The dessert was made famous by a chef at Boston’s Parker House Hotel in 1856. {Hence, the “Boston” part of the name.} It typically has two layers of white sponge or butter cake that are sandwiched together with pastry cream. A chocolate glaze is then poured over the top of the cake and allowed to drip down the sides. So why “pie” and not “cake?”

“They” say {and by “they,” I mean “the internet”} that colonists didn’t own cake pans, so they baked their cakes in pie tins. I am not an expert on the early Americans, or their bakeware, so I’ll take Wikipedia’s word for it.

Back to the recipe.

I did my best to remember what my sister had told me about the way she makes it. She uses our mom’s Poppy Seed Cake recipe for the base – which gives this a nice twist. But for the filling and glaze, it would be up to me and Google to find something.

Martha Stewart had a custard recipe that sounded fairly simple, and I found countless chocolate glazes to pick from.

I’d give my first attempt a B.

First, Martha’s custard called for 6 tablespoons of cornstarch, but I found that was too much.

Next, the glaze recipe I used didn’t make enough to “drip” down the sides of the cake. So I made more for the next version. {Besides, it’s not like more chocolate could be “wrong”.}

Finally, I wanted to dress it up a little bit. It needed a garnish.  But not a garish garnish. Chocolate curls would work. I used my citrus zester for fun little curls, and just piled them on top of the glaze before it set.

I’m pleased to say that this Boston Cream Pie has been tested by our guests, Husband’s co-workers, and various neighbors, and it has {finally} received an A.