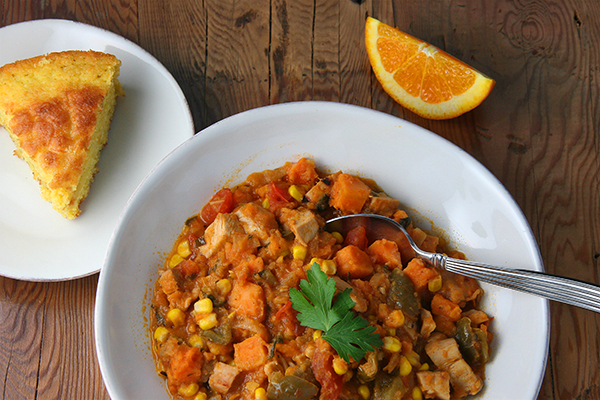 I had bragged one too many times about my marathon cooking sessions, after which I’d have a totally stocked freezer, full of meals and side dishes to feed Husband and I for a month. My girlfriends loved the concept, but couldn’t see themselves doing it. So the idea for a meal-swap party was launched.

The plan was for each of us to make a single meal, in bulk. We’d make enough so that the other six friends would each receive a main dish that serves 4. All of us would have half a dozen new dishes to try – ready to freeze, reheat and serve.

The exchange would take place at my house on the following Friday night, and we’d make it a party – husbands included. After several back-and-forth emails laced with expletives about how much WORK this was, the evening came, coolers were packed and the team gathered at my house.

Victoria — often the group leader — decided that each one of us would describe what we’d made while passing the meals out to the eager recipients. Sally’s husband Steve looked confused… what meals? He thought the cooler he had been asked to haul to our house was filled with beer and wine. {In his defense, that was nothing unusual for our crowd.} Apparently, not everyone had communicated to her spouse the “gist” of the gathering. Now that all were up to speed, the “presentations” began.

So did the heckling.

“Is that shrimp? I’m allergic to shrimp!”

“You totally cheated – there’s no way you made that.”

“How the heck is this supposed to feed four people? Have you SEEN my boys?”

“Whose idea was this? This is stupid. And it looks like a bomb went off in my kitchen.”

In just minutes, the whole thing had unraveled. The boys were refilling their glasses as well as ours, and all semblance of order was out the window.

Sometime around midnight, coolers were repacked with the results of the experiment, and all went on their merry way. While I know everyone enjoyed the fruits of each others’ labor, the price proved too high for the majority.

That was 8 years ago, and every time I bring up the idea of doing it again, I’m shut down before the sentence is even complete.

Oh well. Some of my favorite fall and winter weekends are my marathon cooking sessions that fill my freezer.

This Barbecued Chicken Stew recipe is one I hadn’t made for a few years for some reason. While planning an upcoming marathon cooking session, I ran across it and decided to make it again. I’d forgotten what wonderful and unique flavor it has.

Hints of orange and molasses, and just a bit of a kick make this a wonderful fall stew – perfect with cornbread.